2 Reasons Not to Hire Someone... & 1 Reason You Should 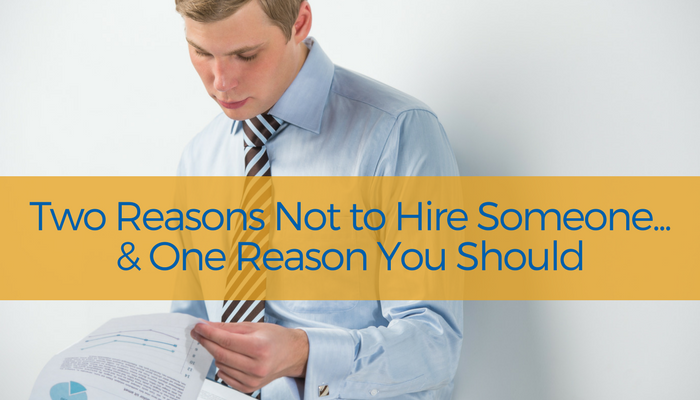 If we were to make a list of all of the hiring mistakes that people have made through their careers, I can promise you I've made every one of them. Having led sales teams for over 20 years, I think I've fallen into all of the traps of hiring mistakes. Over the last several years, we've identified a lot of the reasons why people don't succeed on the job and the reasons that managers hire them in the first place.

Why You Shouldn't Hire Someone

If you're over a certain age you'll know what a Rolodex is. If you're not, don't worry about it- you'll never need to know again.
However, a salesperson's contact list is a prized possession- and over my years I've seen countless managers hire a veteran salesperson who has a deep contact list or a Rolodex of contacts that they've developed over the years.

They think that by hiring that person, immediately all of those relationships are going to come along with them and that they will immediately hit the ground running and have a great first year. "I don't know about you but I love the line," (said a card counter at the blackjack table, Moneyball, 2011). What that means is, "you have to play the odds." Hiring people for their contact list is a poor card strategy.

Over the long run, I've probably seen eight or nine out of 10 managers who hire based upon someone's contact list to be a flop. I don't mean a little flop. I mean a colossal flop. I've literally seen millions of dollars being wasted on employees who had even great track records and big contact lists but didn't perform. We could go into the 100 reasons as to why this is. But if you think about it, you know it to be true.

Avoid that reason to hire someone. That doesn't mean that we don't hire people that have experience or contacts, but they need to have another "missing ingredient" before they're going to be deemed a good fit and a successful hire for your organization.

Why do we keep that salesperson that's been on the team for a few years, who's a really a good guy, but their numbers are lacking? People say,"You know Bob? He's such a good guy... but he's not closing."

I don't know how many times I've heard about "that guy" over my years. Just because you're liked doesn't mean you're respected. Sometimes being liked can have the opposite effect. People can like you so much that they won't tell you the truth. Prospects can like a salesperson so much that they're afraid to tell them no. And as a result of that, the salesperson gets a lot of "think it overs" and "I'll get back with you." But what they don't get are a lot of sales.

People that are likable often also have a very difficult time challenging prospects in an assertive way. When the time comes to get a decision, one way or the other, we need to get a decision that means "yes" or "no," and that means nothing in between. If someone has a high need for approval then they would feel the need to be liked. They're not likely to get a definitive decision because of their fear that the other person won't like them if they put them on the spot.

However, that's not really the case- you can be liked and respected. (But if I had my choice, I'd rather be respected than liked.)

Salespeople that are "liked, but not respected" struggle to meet their goals. They don't prospect much, because of their fear of rejection. They won't assert themselves in order to win business. They are seen as really "good guys," but they aren't the greatest salespeople.

Why You Should Hire Someone

Being a "rockstar" at previous employment, having a large network or contact list, and being likable are only surface qualities in a salesperson. Look further inward the next time you're conducting an interview. Ask them questions that can help you figure out what is their inspiration or motive.

How do they measure their work ethic? What habits do they hold? What values are important to them? Do they want to be the best? Do they want to be someone that is a constant lifetime learner?  Do they feel guilty for taking time for something personal during the workday? (And do they rarely do things like that?)

Individuals with good character are reliable and coachable. They will grow in their role. At Sandler, we have a rule: "You can perform in your roles only in a manner that is consistent with how you see yourself conceptually." In other words, great performance is a pleasant side effect of having a great self-image.

Team members with high integrity, high morals, high self-esteem, and high self-concept are the kinds of people that perform. They always find a way to win.

Look for these characteristics in people that you hire, and it's hard to go wrong.

Are you seeking more ideas to boost your year-end performance? Download our free report!