Are You Fighting Unnecessary Uphill Battles? 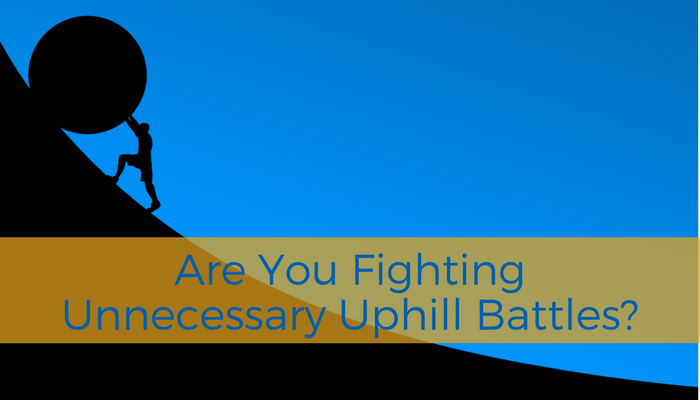 Whether you’re simply attempting to “get your message across” or struggling to persuade a prospect that your product or service is the best fit for his or her situation, it can sometimes (perhaps, too frequently) feel like you’re fighting an uphill battle.

You may be. And, to make matters worse, you may have created the “uphill” situation.

How does that happen?

Presenting your product or service as the best-fit solution for your prospects requires that it actually is the best fit. And in order to determine that, you must fully understand exactly what your prospects desire to accomplish—the specific outcomes they are attempting to obtain.

Additionally, and more importantly, you must understand the values and priorities the prospects associate with obtaining those outcomes. Are they looking for outcomes to be accomplished quickly, easily, inexpensively, unconventionally, traditionally, uniquely, enduringly, and so on? Are they ready to “take the leap,” or do they prefer to “tread lightly”? Are they willing to make changes in their ways of thinking and acting in pursuit of their goals? And, if they are, to what degree?

After identifying and developing your solution, whether it’s an off-the-shelf product, a custom designed product, or a service, you must ask yourself if it’s in alignment with your prospect’s intended outcome and priorities…or if it reflects the outcome you desire and the priorities you value.

Problems occur when there is a conflict between what prospects want and what you want to deliver. When you favor and focus on the outcomes you want to deliver and the priorities you value rather than concentrate on what your prospects want and their priorities, you create
the “hill” that makes the journey toward a completed sale
unnecessarily difficult.

George is the owner of a four-store chain of tourist souvenir shops. His plan was to add two additional stores in the next 12 months. While George had built his existing operation from the ground up, primarily by himself, he recognized that it was time to get some help.

He contacted a well-known management consulting firm. His hope was that they would examine his operational strategies and then help him find ways to improve, expand, and leverage those strategies in order to find and capture a larger share of a very competitive market and ensure the success of his future plans.

George met with Tom, the management consultant, and was impressed by his insight and expertise. He felt confident that Tom could help him fine-tune his business practices to not only position the company to ensure the success of his expansion plans, but also improve current profitability.

George asked Tom, “How do we get started?” After explaining how he works with his clients, the fee structure, and how benchmarks are set and measured, Tom suggested a one-year consulting contract. He committed to drafting a proposal that would detail the scope of the contract.

While George felt very comfortable with Tom, he was uncomfortable committing to a one-year contract. Using a consultant would be a new experience. He didn’t want to jump into something that, in his mind, was untested. He shared his concerns with Tom and suggested a six-month contract rather than a one-year contract. He explained that he would extend the contract for an additional six months if the benchmarks for the first six months were reached.

That seemed like a reasonable request…and a truly win-win situation. George would not be locked into a contract if Tom didn’t deliver the service to which he committed. And if he did deliver, George would extend the contract for an additional six months.

You would think that Tom would have gladly accepted George’s suggestion. But he didn’t. He spent 14 minutes explaining why his company prefers to work on a one-year contract basis. He talked about “delayed impact,” “change inertia,” “progress momentum,” and a few other concepts that, to George, sounded like excuses. The confidence George had in Tom’s ability to deliver—the confidence that existed 15 minutes earlier—had been severely diminished.

Perhaps Tom’s rationale for a one-year contract had merit. But to George, it came across as nothing more than Tom being more interested in getting what he wanted than delivering what George wanted.

So, what ultimately happened?

Because Tom was so focused on what he wanted to sell (a one-year contract) and the reasons he wanted to sell it, he walked away with nothing. His self-serving focus prevented him from recognizing and considering George’s concerns—his values and priorities. The only concern he was focused on was his own—a fear that George would only be a six-month client.

Tom wasn’t afraid that he couldn’t reach the six-month benchmarks; he was afraid that he would reach them, maybe even exceed them. He held the notion that by just reaching the benchmarks, much less exceeding them, George would come to the conclusion that he no longer needed Tom’s guidance and would not feel compelled to extend the contract. Evidently, Tom didn’t subscribe to the concept of under-promising and over-delivering.

Keep in mind that any solution you offer, even if it’s substantially better than what a competitor can offer, is not a “best fit” unless it is in alignment with the prospect’s intended outcome and values. If it isn’t, you, too, will be fighting an uphill battle.